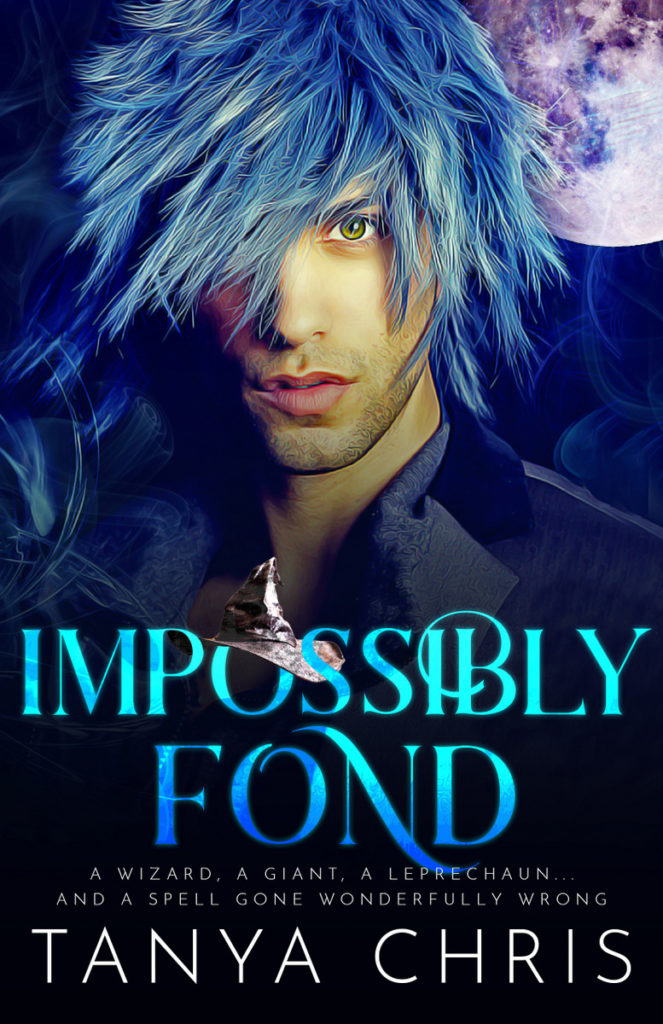 When a hostile leprechaun forces an inept wizard to flub the spell he’s casting on a mini-giant, the result can only be… fondness? Waltham has accidentally spelled Ian into liking him, and now his hostage/windfall, aka Mindy, insists he fix it before she’ll turn over the pot of gold she rightfully owes him.

Waltham’s figure is as stringy as his hair and his words are as sharp as his nose. He’s a selfish, greedy fledgling wizard with a ratty hat and a worse attitude. There’s no way someone as handsome and kindhearted as Ian would like him without magic in play. But as the three reluctant companions set out on a quest to assemble the ingredients for an anti-spell, a different kind of magic happens. Ian’s unflagging belief that Waltham is worthy of love makes Waltham begin to wish it were true.

There are grasshopper gonads to be collected, moonbeam crystals to be harvested, kitten tears to be wrung, and somewhere, at the end of the rainbow, a pot of gold to be collected. But if Waltham can overcome his upbringing and mend his ways, then maybe—once the spell has been lifted—something real will remain.

The galoot raised Waltham’s elbow to his mouth and pressed the lightest of kisses to the scrape. His lips were surprisingly soft, very full and tender but probably carrying a veritable army of germs. Waltham withdrew his arm, and the galoot’s pucker faded into a pout, as if Waltham’s elbow were a piece of candy that’d been taken from him.

“I do,” the galoot agreed immediately. “I like you a lot.”

“Oh, I’m only a rather average-sized galoot," he demurred. "But I'm strong.” He flexed his biceps in illustration and Waltham nodded approvingly. Very strong.

“What’s your name?” Mindy repeated, as if she were talking to a small and stubborn child, and honestly the galoot wasn’t coming across as a creature of particular intelligence, considering how immediately he’d taken to Waltham who’d been trying steal his gold. Mindy’s gold. His gold.

“A good name for a giant,” Mindy said.

“Do you think so?” Ian asked without taking his eyes off Waltham.

“You mean that the other way around,” Waltham observed. “Ian is in giant. Giant’s not in Ian.”

“That’s so clever,” Ian said enthusiastically, as if Waltham had said something… clever. “I’ve had that name my whole life and never even noticed. Ian is in giant. You must be really smart.”

“But I’m the one who said it,” Mindy squealed. “I said it backwards, but you knew what I meant.”

“Mindy,” Mindy answered, even though Ian had clearly directed the question to Waltham. “Hellooo, person talking down here. Look at me.” She fluttered her wings, raising herself up to eye level. Waltham put his hand on top of her head to push her back down. He was enjoying the attention. When you traveled with a green leprechaun in a pink tutu and matching wings, you got very little attention.

So much fun! This book is a hilarious take on the typical high fantasy adventure grouping off on a quest.

loveQhuay on Reading under the rainbow wrote:

The best scene was the grasshopper hunt, it was more then hilarious. I laughed so hard. Waltham and his ignorance of things was so cute, especially when Ian knew things he didn't. They completed each other perfectly. Really, really loved this story, I couldn't put it down and read it in one-go. It was so good to be in this world with Ian& Waltham. Highly recommend it.

Overall, this is a surprisingly deep and emotional tale, whilst at the same time maintaining a funny, quirky nature. It is well written and sweeps the reader along with a real sense of direction. Although only one of the characters is human…basically, they all have a sense of solidity and realness that makes the book a satisfying read.