I tweeted about it being free and a few people RT’d me. I also posted to a FB group for M/M readers. I ran a $7 ad in a relevant newsletter. I think that’s the sum total of the marketing I did. Like I said, I had no idea what to expect.

In total I gave away more than 800 copies, more than half of them in the first two days. That sent me to #1 on the free list in M/M Romance (although this is a short story, Amazon has, for whatever reason, never tagged it as a short read, so this was the full-length category). It only spent a day at #1 but it was in the top 10 for the entire 5 days, because the best seller list is a self-fulfilling cycle. Readers see it so they buy it so it stays on that page.

I believe strongly that a huge percentage of the people who claimed the book didn’t read it. I feel like there must be people who just haunt the free lists and grab whatever they can get, regardless of whether or not they’d be interested. Because 800 copies? That was more than this book had sold total in its lifetime, and it was only a 99 cent book. If there was that kind of demand for it, 99 cents isn’t a gigantic barrier.

I can’t begin to explain how this works, but that title has seen an increase in traffic ever since that free period. Immediately following the free period, KENP more than doubled (and remember it didn’t decrease during the free period). Two months later, both sales and KENP continue to be slightly higher than they were before the free period and overall I’ve nearly doubled reviews in that time frame.

Across all books, my KENP was slightly higher after the free period than before. Since I didn’t have a new release during the time, the normal trend would be downwards. In the graph below, you can see the free book spike and below that, the following increase in KENP. 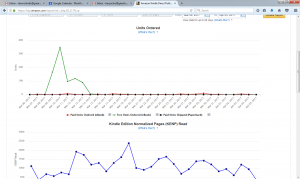 The heightened interest in this book (and reader reviews to the effect that they’d have liked a less abrupt ending) caused me to write an epilogue (Back Under) and put it on my website. I’ve updated the ebook to link to my website where I’d hope to collect newsletter sign ups. My one regret is that I didn’t do that before I gave away 800 copies.