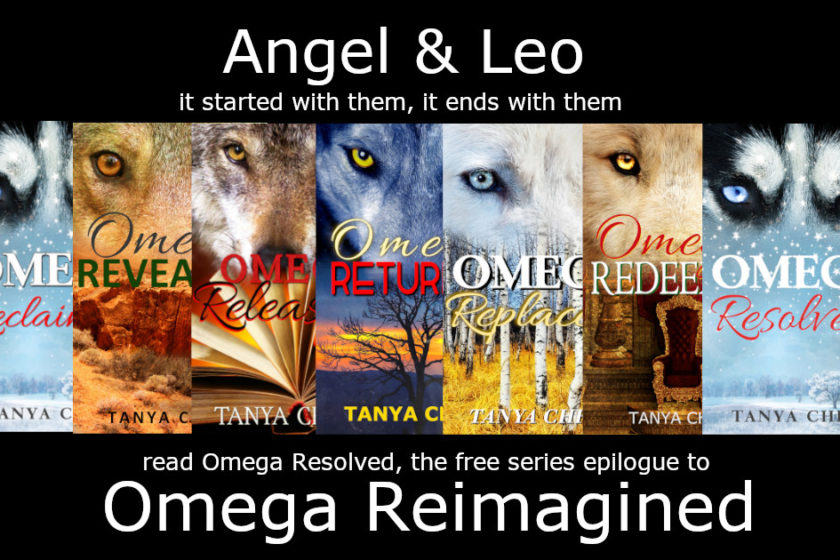 This is an epilogue to Omega Reimagined featuring Angel & Leo, the couple from the first book, Omega Reclaimed. It’s unlikely to be of interest to people who haven’t read a substantial portion of the series and includes serious spoilers for the last book. Read this last!

Inside the palace, there was bedlam. Outside, there was peace. Leo and I took the long way home, detouring into the woods rather than cutting straight through market square. Leo was head omega now. And I? I’d been born Prince Angel, but who was that? A robe and a title and an untapped potential. Today, I’d become something less but also something more.

We didn’t talk as we walked. A light snow had started to fall, filling in the ugly splotches of mud with its uniform whiteness, hiding the dirt but not erasing it. Columns of birches rose above us, their trunks as white as the snow. Next to me, Leo walked in darkness. His hand found mine—a warm reminder that I was still alive, despite having lost both a mother I’d hardly known and a brother I’d always hated.

Yes, Marta had chosen her fate, but I hadn’t intervened to change it, and I suppose the same could be said about Devin. The road to tonight’s events had been long and well-marked. He could’ve stepped off it at any point. But his words echoed through my mind. You would kill your own brother?

“Do you think less of me for killing Devin?” I asked Leo, even though his hand in mine already gave me his answer.

“Do you think less of me for killing Bruce?”

“Because you were revenging what Bruce had done to you, preventing him from doing it again. Devin never hurt me.”

“Technically, that makes you more noble—that you were avenging others, not yourself.” He looked pensive for a moment, then shrugged. “I did what I had to do. I’ve stopped feeling bad about it.”

“No.” His hand tightened in mine. This was another thing we would share then—an unerasable history of violence. “But if I can be head omega, you could’ve been head alpha.”

Leo tugged me around to face him, pulling us both to a halt. “You,” he insisted. “You would’ve made a good head alpha. But a title can’t change how much I love you. You’re my head alpha. Always will be.”

“I’m not even your alpha,” I teased. I stroked a light claw along the side of his unmarked neck. I understood why Leo didn’t want me to claim him, but…

“Yeah?” I was naked, my ceremonial robes having been left on the stage, but Leo wore a pair of trousers. When I stepped into him, his cock brushed against me, hot through the lightweight fabric, lengthening as I let my fangs trace over his skin. “Are you sure? You never wanted me to before.”

“I thought a permanent bond was too much, that forever was too long. But it’s not, not with you. Claim me.” He tilted his head to the side, opening up that juncture at the base of his neck to me.

“Out here in the snow?” he asked with a laugh.

“Where better?” The woods were so quiet, bright with flurries but deep and silent, a cathedral where our love could be consummated. And I was as hard as Leo, even if I shouldn’t be. Adrenalin thrummed through me—the energy of victory, the pain of loss, the peace of resolution.

“Do it like you mean it though,” Leo challenged when I leaned down to take his lips in a gentle kiss.

“You think I don’t mean it.” I yanked him against me, knowing what he wanted—tough Angel, ferocious Angel, the alpha who’d just won a challenge, not the brother who regretted it. If I was going to claim Leo, finally and irrevocably, it had to be just me and him, no ghosts between us.

I backed him up until I had him pinned against a tree trunk, forcing my steely body against his. Leo was no fragile omega. He was made of hard-earned muscle and wiry determination. But he enjoyed being treated like the little thing he wasn’t, liked it I went alpha on him.

I ached from a hundred wounds, everywhere Devin’s fangs and teeth had pierced me. My arms and legs were weary, drained from wrestling with a wolf heavier than I was. But I found the strength Leo needed from me.

He was strong, but I was stronger, and I showed him that, lifting him off his feet until his head was higher than mine, until my teeth brushed his neck. I gnawed at him, teasing. I wanted to claim him so badly—had always wanted it. I would never say I settled for being his husband, because I’d spent every minute of our time together grateful for it, but I was an alpha and Leo was my omega. I burned to see my mark on his throat.

But not until I had my cock in him.

I lifted him even higher, showing off now, bracing him against the trunk to nip at his groin. The cloth there fell to my teeth. Leo made a weak protest at the destruction of his trousers but the smell of slick told me how he really felt. His cock was so hard, pointing straight at me, and my fangs were sharp and dripping, but I still had enough control to use them lightly.

I gave his dick a good, sloppy gnawing. Tongue and teeth and enthusiasm. He giggled and groaned and bitched and pleaded. He wanted me to stop, he didn’t ever want me to stop. Ouch and oh and Angel and Alpha. And I loved him. Loved him more than I wanted him, and I wanted him a lot.

“Are you ever going to knot me?” he complained when I’d been sucking him so long my arms shook from holding him up. I lowered him back down to the ground.

“Just for that, maybe not.”

He shifted—what remained of his trousers shredding around the wider haunches of his wolf form—and took off through the trees. I paused long enough to howl, my wolf giving voice to the joy of a chase and the anticipation of a claim. In wolf form, my wounds seemed less troublesome, my energy less drained. I’d been born to run, so I did.

There was no disguising Leo’s black fur in an all-white landscape, and the falling snow made a blank canvas on which each of his footsteps appeared in sharp relief, but I didn’t need either of those visual clues to track him. Even though I’d never embedded my scent markers in him, he smelled like me. Like us.

Leo was fast in wolf form, a clever conniving strategist. He led me around in circles, ducking under and through anything he thought might slow me down, but when he made a dash out of the birch grove, heading for a thornwood bush, I threw all my strength into a single pounce and caught him. I got my teeth into the scruff of his neck, right where I was going to bite him in human form, and dragged him through the bush he’d been aiming for, into the hollow at the center. I stood over him to offer a triumphant howl to the moon, the one I hadn’t felt able to give after beating Devin.

Leo shifted back into human form. All naked now—panting from the run and still so hard and slick, a feast of scent and sight. I nuzzled at his neck, picking my spot, then returned to human form myself.

“I guess you earned it,” I said with a smirk. We should’ve been exhausted, but the air crackled with sexual energy. “Present yourself like a good little omega, and I’ll give you what you need.”

“If you want me to present, you can fucking—”

I flipped him without comment, manhandling him into the position he loved best. When he was forced into it. I draped my body heavily over his and spoke into his ear. “I guess I fucking will then.”

“Angel,” he whined, caught in the place between rebellion and submission. All his senses were firing now, I knew. He was so, so wet and grinding back on me even as he struggled.

“Say Alpha,” I challenged him.

“Close enough.” I pushed into the wet laxity of his hole, which welcomed me without conflict. He sighed when the beginnings of my knot pressed up against his firm ass cheeks.

“Alpha,” he said now. Because he wanted it.

“Yeah, little one. I’m your alpha.” I already was. The claim was a token, a formality, but as I started driving in and out of his body, I found my climax rushing toward me with unexpected speed, spurred on by the prospect of what was to come.

Leo felt it too because he bucked beneath me, helping me fuck him by adding his strength to mine. My knot grew and grew until we needed that combined strength to force it into him. He screamed with something like pain, but he wasn’t asking me to stop. He wanted the brutality of my body, loved me in all my ferociousness.

When my climax couldn’t be held off a moment longer, I buried my knot and my teeth at the same time. My come burst inside him as his blood burst inside me. His cock spurted, my cock spurted, his neck spurted. Everything was wet and hot and savage and true. I’d tasted his blood before­, during many a practice fight, but today it tasted like surrender.

“Alpha.” His tone was so reverent that I knew he didn’t just mean me. He meant us. Him and me and our whole wolfy world which sometimes came together like starlings in flight—separate but united. We were never perfect, but we were beautiful.

I gradually became aware of the snow under my knees and the fact that Leo was embedded in it. He was shivering, whether from aftershocks or cold, I didn’t know. I let my fangs slip from his throat, but my cock wasn’t coming out anytime soon, so I got us rotated around until he was sitting on my lap, using my legs to keep his out of the snow.

“Same back though.” I nuzzled at the mark I’d left, licking over it to speed the healing, loving the hint of myself his blood now carried. It wasn’t the most comfortable position we’d ever knotted in, but I could’ve stayed there forever. My knot receded too fast.

Together we crawled out of the thornwood bush and made our way back to town. The palace stood white and empty in the falling snow. Inside it, Marta and Devin lay in state—both being honored despite only one of them deserving it.

“Do you mind if we make a stop?” I didn’t even have to tell Leo where I wanted to go. He walked by my side as if he already knew, and probably he did. Right at the center of market square, where there used to be a flagpole, Marta had erected a monument in honor of an omega named Kady.

“We don’t deserve a flag,” she’d told me the day she showed it to me. “Not until we do better.”

I knelt down in front of the stone and brushed away the snow to reveal the legend carved into it. In memory of the omegas we failed. I could finally say what she had hoped would one day be true. “We’ve done better, Mama.”

Make sure you never miss a new free story by signing up for my newsletter.

If you enjoyed this story, you might also enjoy 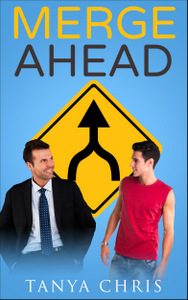 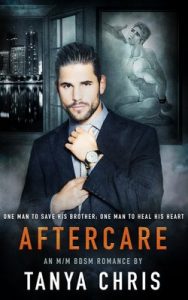 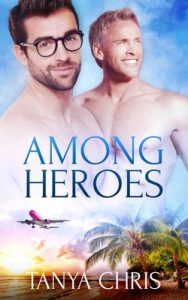